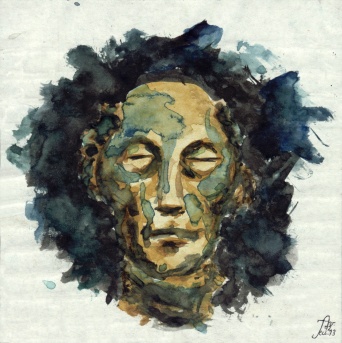 The Dead Man? Death?
One meeting with him.
One reflection on Death.

Certainly not a banal and naïve representation in the form of a skeleton, a skull or a Reaper. Indeed, this work emanates from a person familiar with metaphysical reflections and who, before being an artist, received an education destining him for functions of a spiritual order.

Calm appearance and troubled ideas represent illustrious personalities throughout the ages. These are personalities whose faces end up on medals or busts decorating some prestigious halls or galleries of royal, governmental or private palaces.

In continuity and realized the same day, Mort represents the second phase of the face of the great ones of this world, a phase that is generally not represented on a medal or as a bust! But that one could see on the mummies of Lenin, Mao or Atatürk, pale pastiches of their archetype: the absolute monarch that was Pharaoh. This explains the choice of the face of Ramses II. Definitive death, resurrection without hope of life.

By excluding any other framing showing the body, for example, Joukhadar focuses our attention on the essential, on the face of Ramses. Frontal, vertical, hieratic, it puts us in a disturbing face-to-face with physical death. Would physical death be just the sign of annihilation? Is it the unavoidable passage to eternity? It is evoked by a range of cadaverous ochre enhanced by Prussian blue, metallic and glacial, annihilating the colours of life. Pieces of skin appear to be detached, like mouldy flesh now only holding on in shreds.

Is the apparent serenity of the eyes real? Those whose consciousness goes beyond the limits of the physically perceptible know that the worst suffering inflicted on a body is embalming or any other process that deprives it of contact with the earth and the freedom to decompose itself.

The face and the look of a paraplegic seem serene, but what do we know of his suffering? Does the slight grin on the right of the face, an indelible witness of the last moment, express a satisfaction or would it be that of the arrogance of the criminal confused by the evidence?

The background, which participates in and accentuates the trouble raised by the face, would certainly not have had the same impact if it had spread to the frame. Reduced to a kind of halo with cleverly intentional irregular edges, it gives the furtive impression of seeing diabolical horns or ears, the magic of the psychophysiological processes of sight.

The brainwashing techniques practiced by the secret services are all based on a deep psychological trauma. One of the worst traumas inflicted in this perspective is the deprivation of any visual or auditory stimulus. The more time passes, the more the privation of sound and light becomes atrocious. The face of Ramses is girded with an abysmal black which separates him from the bluish obscurities that surround him and annihilate all light. A light he claimed to possess and to which he considered himself destined. This is just the beginning …