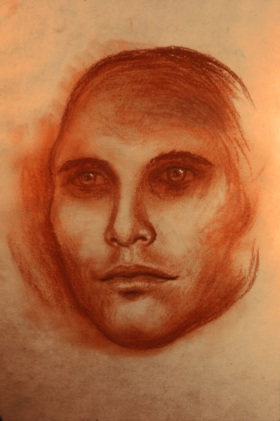 “I did it in a sort of second state. I remember, I was absorbed in a deep reflection on the human condition, it was two or three hours before sunset. I remember everything, the terrace where I was, lighting, colours, objects, everything but sound, absolute silence. I went to my room, took the first sheet that fell under my hand and sanguine (a material I had never used except when I bought it a month ago for some highlights on a quickly done drawing with a red pen). I was as if hypnotized. I began by drawing one eye then two others underneath and I continued drawing a man’s face from a female model.

This face has something feminine and at the same time masculine in the chin and the jaw. In reality, it is neither feminine nor masculine, it is a human being, a consciousness. Suddenly I stopped drawing; I mechanically erased the first eye that was on the forehead. For me it exists. The face has no definable expression, except a look as if horrified. In reality it is the gaze of a person who has attained enlightenment through physical death and, from the beyond, looks at our world with an absolute consciousness without being able to communicate with us. It is only by understanding his gaze that one understands the message he is trying to communicate to us.”

Joukhadar gave this work to a great art collector. He did not expect the sanguine to be appreciated. He had shown it in silence, during slide show sessions, and was often amazed by spontaneous reactions. People fascinated by the impact of the projection made a kind of osmosis with the works they saw.

One of them, a graduate in philosophy, exclaimed with emotion on seeing the face: “If I see him in front of me, I’ll know that I am no longer of this world!” Then she apologized, saying, “I must have said something stupid,” and he replied, “on the contrary, it’s the best comment I’ve ever heard.” At another session, a woman surprised Joukhadar with this comment: “It is a person who has lived and perhaps died a thousand times, a person who knows and looks at our world with irony.”